Now that we’ve got the main essentials out of the way we’re going to talk about assembly and prep. Many models come in more than one piece. This is to make molding the mini easier for the manufacturer to produce it. When the mini comes to you in pieces there’s no need to worry. I’ll walk you through what you need and how to do it.

If it’s on a sprue you’ll want to remove the pieces from it. A sprue is, generally, a piece of plastic or, in some cases, metal that holds the pieces of the mini to it. This is material leftover from the molding process. For some modeling kits it makes it easier to manage than to have the manufacturer cut all the pieces out for you and then you have to try and figure out what goes where by intuition.

Now you have a couple of options here. You can remove the pieces and wash them off of the sprue or leave them on and wash them that way. By washing, this time, I mean with soap and water. This will remove mold release residue. Mold release is what the molds are greased with so the mini will come out of the mold without issue. Think of it as something akin to baking spray only not edible.

You’ll want to use a soft toothbrush. Preferably unused and only dedicated to cleaning miniatures. Then you will want some gentle soap. Something strong enough to remove the release but not so strong that it will leave it’s own residue. I use a scent and dye free dish soap made for cutting through grease. You also want to make sure you rinse the miniature very well after a gentle scrubbing. Any soap left over can easily make painting difficult if not impossible.

“Well how do I get the mini off the sprue?” you might ask.

There are several tools to do this job. The first one being sprue cutters. Sprue cutters allow you to remove the mini and other pieces. However, if you are not careful you may end up breaking delicate pieces. 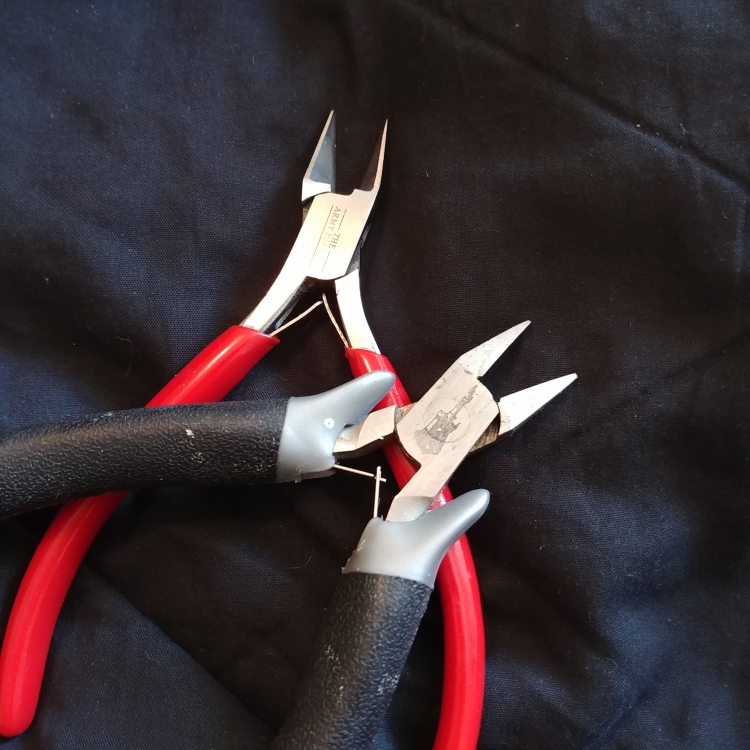 Sprue cutters will generally have a side that forms a V and then is flat on the other. For most things you’ll want to put the flat side up against the mini for a cleaner cut. This may still leave some little bits of plastic or metal attached but those are easily fixed later. If you find it to be a large piece of plastic or metal you may want to trim it down more with the sprue cutters.

You’ll want to look at the mini and see if it has any bits of flash (extra pieces of metal or plastic that should not be there) or mold lines.

If the flash is small it can be easily removed with a hobby knife or X-acto knife with a sharp blade. You’ll want to be very careful doing this so you don’t cut yourself. Remember to always cut away from yourself to further prevent injury. 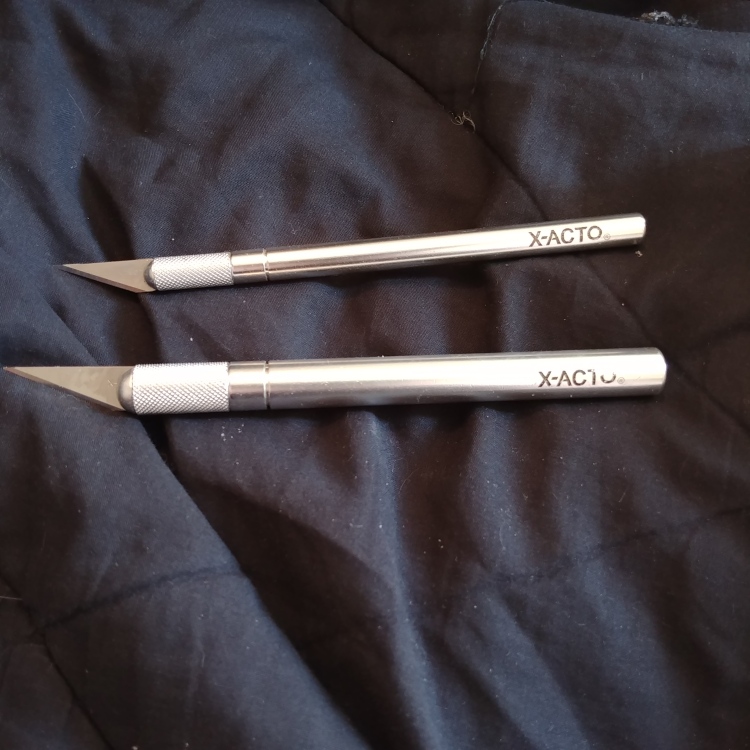 “You mentioned mold lines, what are those?”

Mold lines are bits of metal or plastic that have seeped out of the mold when casting.

This will cause a line to appear in places sometimes obscuring detail. For plastic I will take the blade and, while cutting away from myself, I will little by little trim it down until it is no longer there.

“Plastic sounds easy enough to clean, but what about metal?”

Metal minis can be a little trickier to clean though. Generally, you will want a good set of files, like jeweler’s files, to help remove the mold line. I use a set of file I got from my FLGS, they are great to start on but I’m finding I need something like jeweler’s or diamond files. 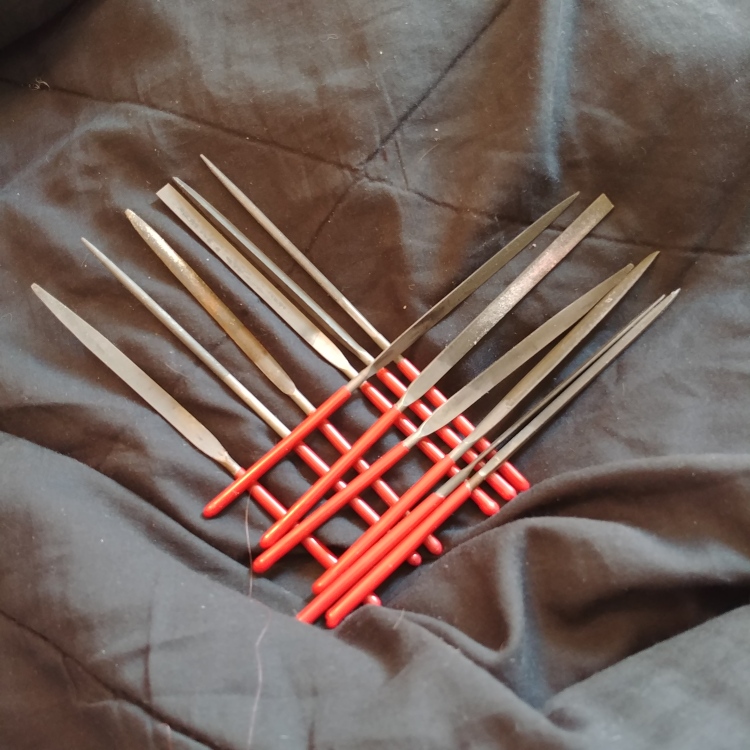 Depending on how hard the metal is you may just be able to get away with using a hobby knife but you will, in most cases, get better results removing mold lines with files.

“Now that I’ve got it all cleaned up what’s next?”

Assembly of course! Now there are a couple of ways to go about this. The most common is gluing. Many minis will stick to themselves with cyanoacrylate type glue aka super glue. I personally use a gel super glue because it’s not as messy. The gel type also works as a very mild gap filler. Most plastic minis are light enough that they will stick together without pinning. For metal minis, if you are using super glue, it is important to rough up both sides so it has more of a contact point to hold onto.

The last type of glue I’m going to talk about is epoxy glue or just, simply, epoxy. Epoxy is a two part resin, it comes in liquid and solid forms. The liquid comes in either two tubes or a syringe that is split in two. You will need to mix equal amounts from each tube and then mix. If you get the syringe type it should push out equal amounts but it will still need a good mixing. I find the easiest way to do this is in a paper cup with a popsicle stick or some other mixing vessel and stirrer because once it sets it’s not usable anymore and it’s easiest to just throw out what it’s on rather than try and wash it off of something. Epoxy will glue just about anything together but the surfaces you’re gluing need to be very clean and free of grease and if you lightly scuff up each piece you are sticking together it will adhere much better. I will talk about solid epoxies a little later on.

I’ll explain quickly what pinning is. Some minis will come with gaps where they should sit flush together. Pinning is a way of taking a small piece of rod and attaching it to both pieces of the mini you want held together without a gap. You will have to drill small holes for the pin to sit in. Pinning makes the pieces sit flush majority of the time and it also allows for a stronger hold for those pieces making it less likely they’re going to fall apart over time.

Now I know you’re wondering how to drill these holes because I know you’re also thinking that a regular household drill would be far too big for something so delicate. I briefly mentioned a pin vise earlier. A pin vise is a handheld drill. It comes with bits of various sizes. It works manually, meaning you have to do the drilling yourself there is no electrical component to it. This can be a tricky tool to work with if you don’t know what you’re doing. I will do a whole post later on about pinning. While it can seem like a straightforward technique the small details can be confusing. 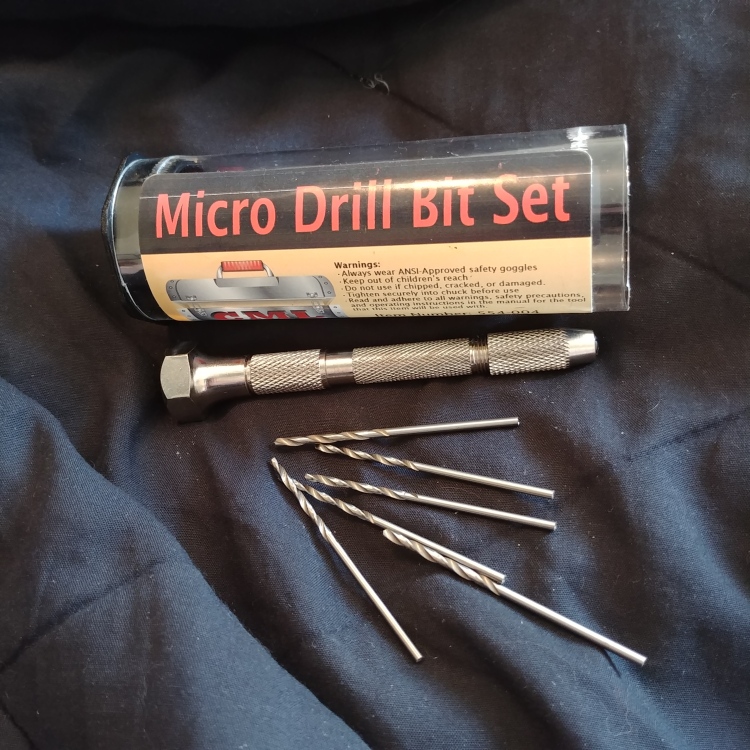 “Earlier you mentioned gaps, what’re those?”

Well gaps are exactly what they sound like. They are small areas where the mini does not fit flush together. 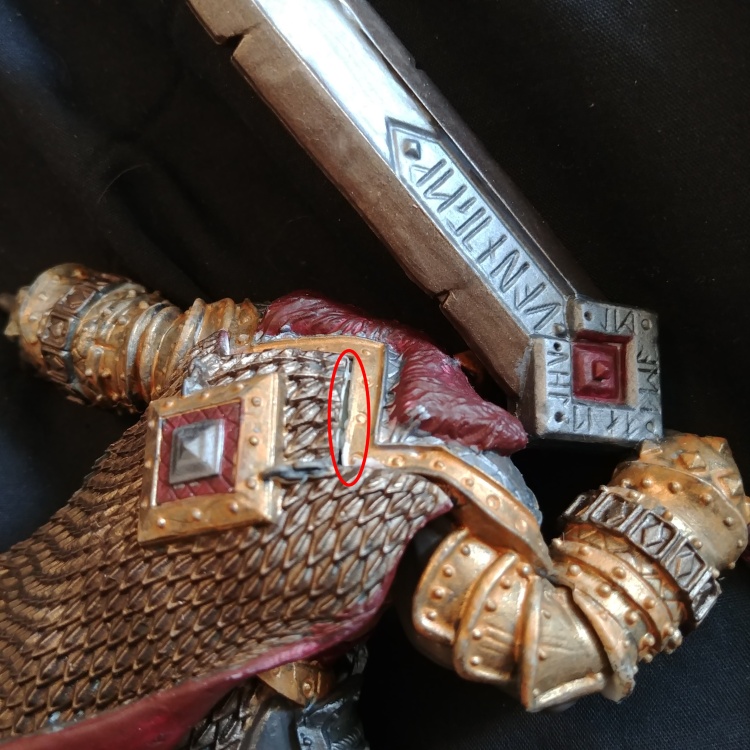 You may not be able to pin some pieces so you will need to use a gap filler. There are tons of different kinds you can use. The most common one is Kneadatite aka Green Stuff.

It is a solid two part epoxy putty that primarily comes in either a roll or a tube. I find that the stuff that comes in a tube is a little easier to work with. You will want to take equal parts blue and yellow putty and mix it together very well. This will leave you with a lump of green putty or Green Stuff.

You then take it and carefully fill in the gaps and if need be sculpt in details that may have been obscured. For instance, if you are attaching wings onto a dragon you may want to fill it in to give it extra stability and then you would probably need to sculpt scales into the Green Stuff once it has cured a little. I usually let it sit for 30 minutes to an hour before I start sculpting because it can be very sticky otherwise. It does help if you put a little vaseline on your hands and tools to prevent sticking to them.

I know this has been a lot of information and some of it may be confusing but I will do step-by-step tutorials in the future to show exactly what I mean when going through some of the processes. Next week is all about metal minis. See you all then!

(Disclaimer: Not all photos shown are my own, some came from Google image search.)